I’m Matthew, director of Bureau – the design studio working with the Software Acumen team on the identity design for the Lean Event.

The distinctive style we’re using for the Lean Event is the result of a lot of discussion, research and experimentation. This is the story of how we got there.

When we first started looking at branding, our starting point was some posters of various socialist leaders that Mark (Dalgarno, co-organiser of the Lean Event) liked. They were inspiring not because of the political ideas of the subjects but the use of portraiture as a striking visual device to inspire revolution, progression and change.

The idealism of these portraits was something we wanted to draw on. We wanted to apply the same approach to speaker headshots – usually a big part of an event’s imagery. We also looked at Roy Lichtenstein and the Stenberg Brothers (I liked their Constructivist cinema posters – they’re really energetic and colourful). 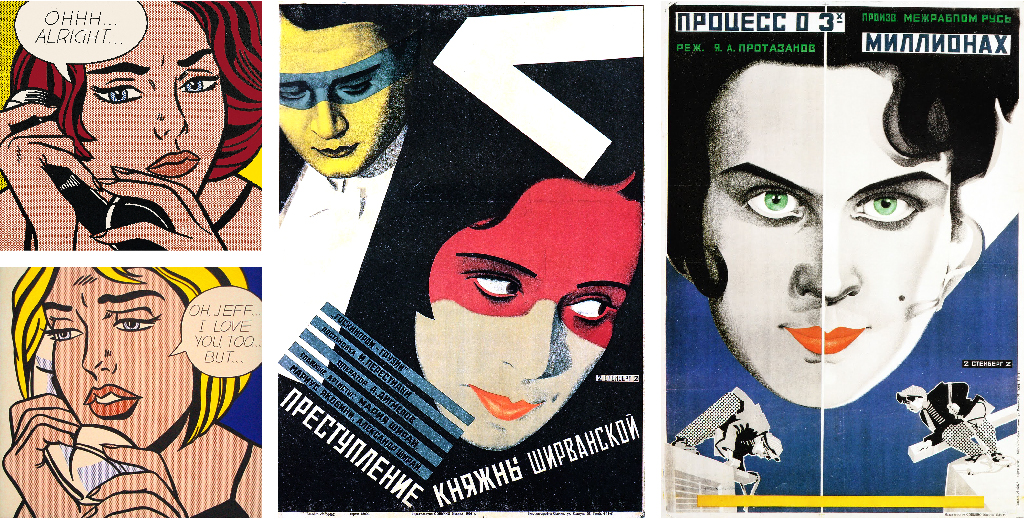 Mark was very interested in venue design and site-wide graphics – with more striking branding than we’ve used at other events. I went away and did more research, looking at other political imagery, cinema posters (both contemporary and early to mid-century) and magazine covers.

I wanted to get a feel for typography and portraiture in unison in a variety of contexts. I also looked at other conferences and events to see what they were doing – we wanted to be distinctive.

After I’d collated the research, we discussed it amongst the event team. Visuals from competing events had a mixed reaction – some were a bit ‘vanilla’, but others were much more striking and memorable. We wanted to be in this category.

We noticed that conference speaker photography was almost always black and white. The photography we liked best, though, came from The Wire magazine (it was very moody, often with quite cold/austere lighting). We also liked the idea of using illustrations instead of photography, but worried about falling into the pastiche of the propaganda materials.

Covers reproduced with kind permission of The Wire.

Our favourite materials used typography in a confident, minimal way and had an extremely restrictive colour palette with one or two very bright accent colours.

After looking at what other events were doing, we now felt confident about the sort of feelings we wanted to communicate, and how we wanted the conference to be perceived. We wanted participants to:

We knew that getting the visual identity right was an important part of this. However, there were some practical aspects to consider:

A rough consensus started to emerge. Photography, in the right style, would provide a reference to the posters but feel more contemporary. We decided to use a constructivist approach to layout and typography and felt that a bright or neon colour (but definitely not red) would be distinctive in the lean landscape. It would also help to avoid any material becoming too close to a pastiche.

Before going too far, we did a quick test. I borrowed some higher quality headshots from another event I’d worked on with Software Acumen, looking for as close to neutral expressions as I could find, as well as a few smiles so we could test those too.

The photos were quickly processed to black and white and some very rough poster compositions were put together. There were a few very obvious problems.

First of all, the typography was not working. The vaguely constructivist feel of the compositions was way too over the top, and very much in the realm of pastiche, which was so crucial to avoid. We were trying much too hard.

Secondly, the photographs in greyscale alone were not right: they didn’t have enough texture. There was no obvious connection to our reference points. Generally, the test felt like a very poor fit for what we were trying to achieve; it didn’t create the mood we were looking for.

So we went back to the drawing board. We left constructivist-inspired typography behind and adopted a much more modern and contemporary feeling geometric font set across a grid. We also stripped back the photography by isolating the subjects on either a black or white background. We kept 2 of the ‘smiliest’ portraits, as we theorized that these would be the most frequently occurring expressions in submitted photography. 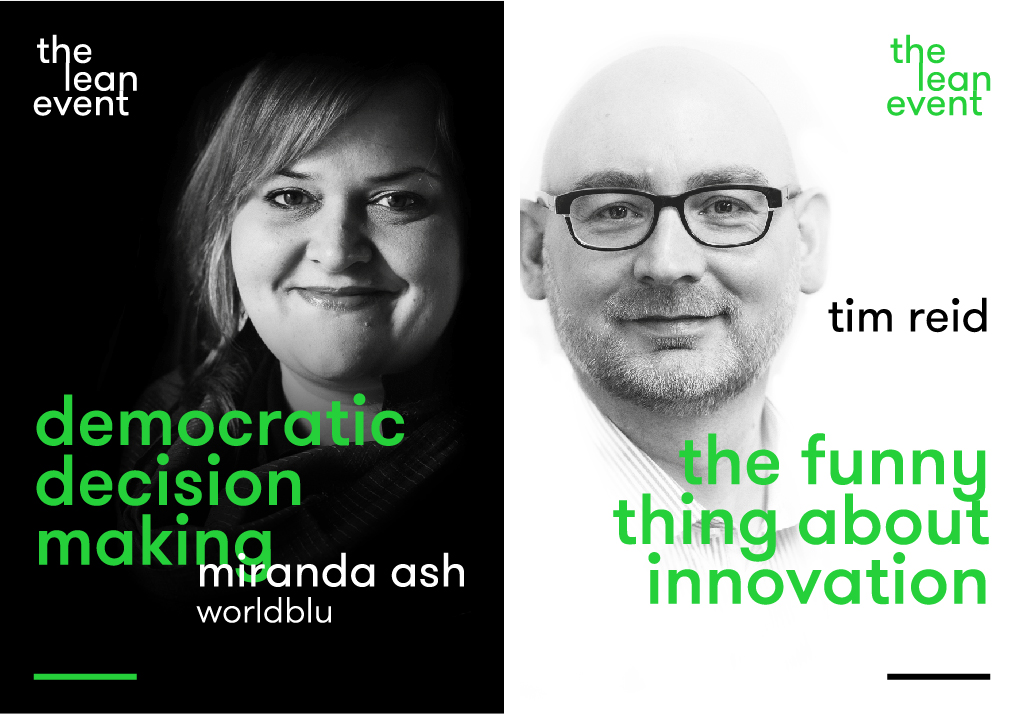 The new typography was a marked improvement, but the photos still weren’t right. We experimented with halftone effects to reduce the image’s resolution and create a poster-like feel. This still didn’t feel quite right, so we started to think about illustrations again.

Mark liked Joel Benjamin’s style, and I’d worked with him before, so we contracted him to produce some test illustrations of our first speaker, Jeff Gothelf. To test the theory that submitted photos wouldn’t necessarily have subjects in suitable poses, we gave Joel a handful of photos and asked him to recompose Jeff so that his pose and expression fitted the mood we wanted. 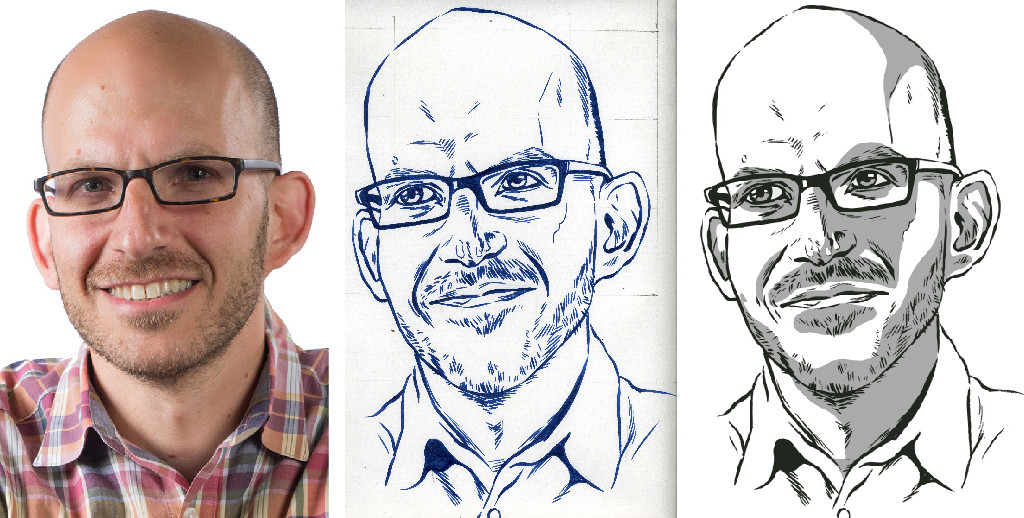 We tested the resulting illustration in a range of different colours and it instantly felt much better than anything we’d tried before. We knew Joel would be able to work round any facial expressions that didn’t fit the mood we wanted, but to try to avoid giving him too much work, we also created photography guidelines for speakers.

It’s working really well so far: we’ve got a consistency and distinctive style that wouldn’t have been achievable if we’d simply used submitted photography. And the reception has been really good – some speakers are using the illustrations on their Twitter profiles and we’ve had really positive comments on them, and on the event’s style in general.

We’re now creating smaller visual assets to help promote the event, but the identity will be most effective once it is applied to event literature and on-site graphics, which are our next challenges.